PlayStation
1 Trivia
As well as providing the soundtrack for some levels, the rock star Rob Zombie is also a playable character in Twisted Metal 4. His car, Mr. Zombie, is specified to be a "Dragula", which is a double reference to his song by the same name, as well as the show The Munsters.
EasterEgg, Reference, General, BonusContent, Music, RealLife
Contributed by Aiiml3ssTM
Share - Permalink - Source 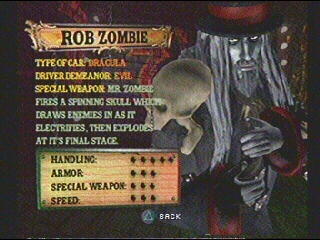