PC
1 Trivia
In the Guild Lobby, there's an NPC named "Tavid Dennant" who holds the Seeds of Destruction quest pieces for the player. He was previously named "Flavin Deepockets" until the release of the expansion pack EverQuest: Seeds of Destruction, and his dialogue features references to Doctor Who and the character "the Doctor", which actor David Tennant had played as the Tenth incarnation.

In response to 'Hail, Tavid Dennant':
'Well hello! What brings a [player's species] like you to a place like this? Me? I seem to have misplaced my scarf, I don't suppose you've seen it? Long, wool, colorful? I can't imagine where I might have left it. Speaking of misplaced things, I've got quite a number of who's its and what's its that I've picked up during my travels. You're welcome to take a look if you think you might find any of it useful. All except for this [watch] of course.'

In response to: 'What watch?'
'I can remember where I found all of these other things, but the watch I just seem to have always had. I can't quite recall when I got it or who gave it to me. Still, I can't imagine parting with it. It's almost like it's a part of me.'

In response to: 'Are you the Doctor?'
'Doctor? No I think you must have me confused with someone else. I've never studied medicine in any form.'

The long, wool, colorful scarf is a reference to the Fourth Doctor's scarf which he's most commonly associated with. The watch is a possible reference to the chameleon arch fob watch from the episode "Human Nature" which could store a Time Lord's memories, making them forget who they were.
Contributed by KnowledgeBase
Share - Permalink - Source 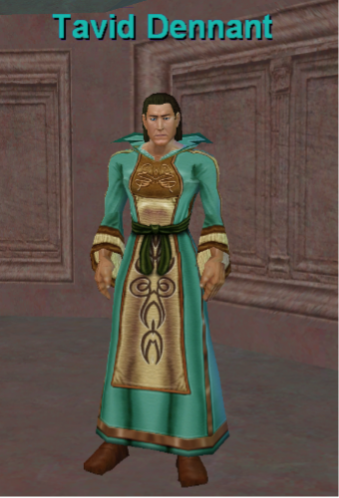