More specific tags can be found on the All Trivia page.
All Videos
Easter Egg Hunting
Leftovers
Region Locked
DidYouKnowGaming
Other
What is VGFacts?
Submission Guidelines
FAQ
Site Stats
Contact Us
Lost your password? | Need to Register? Click here!
GameCube
203 Games
19 Trivia
Nintendo ran a contest to help promote the upcoming release of the GameCube called "What would YOU do for a Nintendo GameCube?" where fans were picked to perform stunts that they'd chosen themselves to win a GameCube, Game Boy Advance, a games package, and USD. Some of the acts which were picked by entrants were to paint Nintendo logos with their tongue, juggling three consoles whilst dressed as a game character, painting and shaving themselves to be a Pikmin, and eating a GameCube made of spam, chocolate syrup, and cat food.
Contributed by KnowledgeBase
Share - Permalink - Source 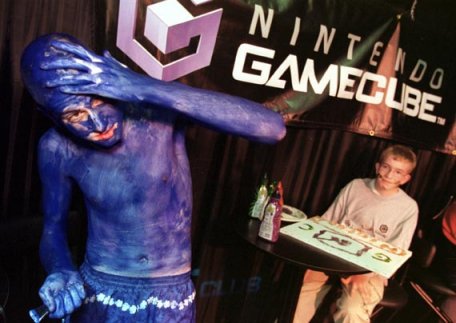