Game Boy Advance
1 Trivia
One of the six NetOps of the game, Kai, is retroactively put into the overheating, about-to-explode bus that Lan saved in the first Battle Network. From that point, Kai idolizes Lan, and decides to enter the Battle Chip GP (the tournament that takes place during this game) in hopes of battling him. The towel around his head is supposed to be like Lan's signature bandanna, indicating just how much he looks up to Lan.
Contributed by SonicManEXE
Share - Permalink - Source 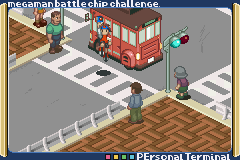