"THIS PROGRAM WAS
WRITTEN BY
OPEN-REACH
WHO LOVES NORIKO
....."
The most likely person as to the identity of "Open-Reach" is Tomcat System's founder and programmer Ryoichi Ookubo because of the similarities between "Reach" and "Ryoichi". It should be also noted that his name is hidden twice in the game's ROM, and from one fact pointed out by a Russian LiveJournal user, that the name Open-Reach appears as "OPR" on the title screen of another game Tomcat System developed, the 1991 Famicom game Castle Quest published by Hudson Soft.

As for Noriko, her identity remains unknown. In the comments section of the sourced video, one commenter claimed that Noriko was Ookubo's daughter who was three years old at the time of the game's development, while the aforementioned LiveJournal user claimed that Noriko was a romantic partner, claiming her to be a former Namco graphic designer named Noriko Ikegawa (whose name would later appear in the credits for the Nintendo game Animal Crossing as a model designer), but there is no substantial evidence to support either of these claims.
EasterEgg, HiddenMessage, Secret, Theory, Rumor, Similarities, Suggested
Contributed by MehDeletingLater
Share - Permalink - Source 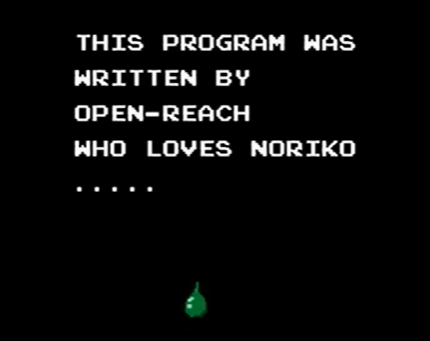