PC, PlayStation 2
20 Trivia
In the bonus co-op mode Half-Life: Decay found in the PlayStation 2 port of the game, the ending of the mode can be seen from the perspectives of either playable character in the game, Gina or Colette. If you see the ending from Colette's perspective, a brief shot of a broken computer can be seen with red electrical arcs shooting out of it. Connecting this arcs in an emulator reveals the initials "MA", the signature of Gearbox Software level designer Matt Armstrong, and a symbol that he would often hide in games he worked on.
EasterEgg, HiddenCredit, Secret
Contributed by MehDeletingLater
Share - Permalink - Source 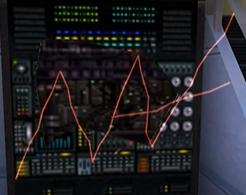