PC, PlayStation 4, Xbox One
8 Trivia
In the Blood and Wine expansion, the quest "The Warble of a Smitten Knight" ends with Geralt lifting a curse laid upon a character named Vivienne, who was partially turned into a bird. In a cutscene prior to lifting the curse without Guillame's help, Geralt warns her that once she becomes human again, she may only live for as long as she spent living with the curse, which is seven years.

Afterwards, waiting seven in-game years after completing the quest will allow you to find Vivienne having collapsed and died inside Yennefer's room in Kaer Trolde in Skellige, although this position is slightly glitched and Geralt can still talk to her as if she were alive. According to the game's lead quest designer Philipp Weber, this buggy appearance was caused by the cloth physics on her dress as dead characters in the game are normally static models, and due to this being one of the last secrets added to the game prior to the end of development, they were unable to fix this in time for release. Coincidentally, this Easter egg was first teased by the developers and discovered by fans in 2022, seven years after the game's release.
Development, EasterEgg, Secret, General, Glitch
Contributed by MehDeletingLater
Share - Permalink - Source 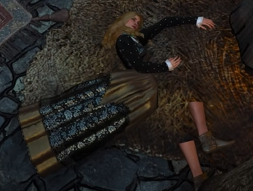