Game Boy Advance
26 Trivia
The games' most prominent subplot focuses on the conflict between Team Aqua and Team Magma in their efforts to gain control of the legendary Pokémon Kyogre and Groudon to change the climate in response to the effect of humans on the environment in order to create expanded environments for sea and land Pokémon respectively. This subplot may (although it has not been confirmed by the developers) have drawn direct inspiration from a real life controversy that was a prominent issue in Japan at the time of the games' development and continues to be. The Isahaya Bay land reclamation project on the Japanese island of Kyūshū, which the Hoenn region is based on, aimed to expand the available farmland in one of Japan's last wetland habitats. This lead to fierce political conflict from environmentalists who argued that the project would cause long-term damage to the wetlands and the marine ecosystem of the area through agricultural runoff released into the sea, and from reclamation activists who argued that Kyūshū needed the land as Japan has very little arable land already and needs to produce enough food to feed its increasing population and keep up with rapid industrialization. The concept of Team Aqua and Team Magma draw striking parallels to each side of this issue (i.e. reclaiming land where there used to be sea and protesting to reclaim sea where there is now land) while being written as cultic villains akin to Team Rocket from past games without distinct arguments to their positions, causing these parallels to be obscured and emphasizing the personal gain of expanding or reducing land for the sake of certain land or sea Pokémon to be won out from the conflict with little to no regard for humanity.

In Pokémon Emerald, the unified story featuring Kyogre and Groudon both being pacified by the presence of Rayquaza, a Pokémon heralding from the sky which in many religions and mythologies is where powerful gods and deities live, hints that a divine compromise between civilization and nature is the necessary solution, with how Hoenn is presented in the final game through the coexistence of different environments, humans and Pokémon being the result. This suggests that the preservation of Isahaya Bay while allowing for land reclamation elsewhere is the compromise this subplot is trying to get across.
Development, Inspiration, General, RealLife, Theory, Similarities, Suggested
Contributed by MehDeletingLater
Share - Permalink - Source 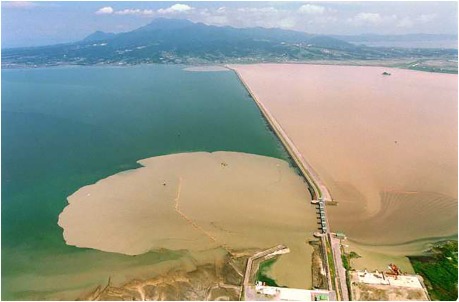