PC, PlayStation
6 Trivia
NSFW - This trivia is considered "Not Safe for Work" - Click to Reveal
At the Veterans Hall, select the Foot and and click the top-left, top-right, bottom-right, and bottom-left corners of the building's sign in that order. A sequence will play out where the stuffed grizzly bear from the Insane Wing appears in front of the building and Butt-Head tells Beavis to "check in his anal cavity". Beavis then reaches inside the bear's anus and pulls out a red piece used in the puzzle game Zoop, which was also published by Viacom New Media around the same time as this game, before putting it back inside claiming that he felt something, but couldn't grab it, and then cutting to the game's title screen. Presumably, this sequence was scrapped from being used in the Insane Wing, but left in the game by hiding it in a different location.
Development, EarlyIdea, Inspiration, EasterEgg, Secret, General, RealLife, UnusedContent, UnusedGraphic
Contributed by MehDeletingLater
Share - Permalink - Source 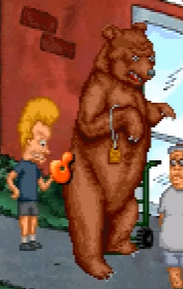