PC, PlayStation
6 Trivia
In the Slaughterhouse, selecting the Foot and using it on the bottom-right corner of the top-left beam holding up the building will cause the Foot to flash. Doing the same to the bottom-left corner of the top-right beam and then the bottom pixels of the two hooks on that beam from left to right will cause a short sequence to play out. Beavis will activate the slaughter machine, and a man wearing a cow mask will be killed in the machine instead of a cow. One of the game's developers who revealed the existence of this easter egg explained that this man was originally a caricature of a recognizable employee at Viacom New Media talking on a cell phone, but another employee suggested the cow mask be added to make the jab less obvious.
Development, Inspiration, EasterEgg, Secret, General, RealLife
Contributed by MehDeletingLater
Share - Permalink - Source 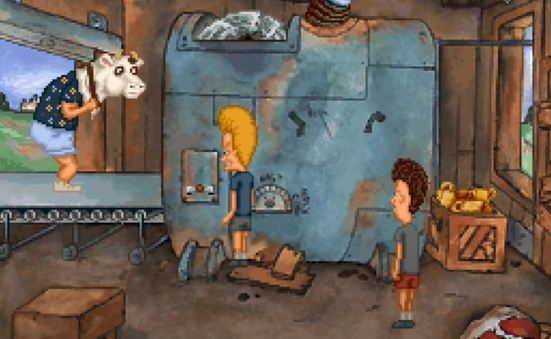