iOS, PC
4 Trivia
In the living room of the Border House, to the left of the corkboard, there is a small, unmarked wall area that when hovered over will reveal a caption for a "Painting". Clicking it will instead cause April to walk to the adjacent right wall where the unseen painting is hung and comment:

"It's a reproduction of an early Lebowski. Not a particular favorite of mine, but, there ya are."
During the cutscene "Vision in the Living Room" which is only played if April has chosen to not work the evening shift at the Fringe Café, a shot of the painting depicting an abstract rendition of a woman's head can be seen. This painting appears to be a caricature of American actress Julianne Moore, who appeared one year prior to The Longest Journey's release in the 1998 film "The Big Lebowski" in the role of artist Maude Lebowski, suggesting that the painting may be a self-portrait.
EasterEgg, Cameo, Reference, Secret, General, RealLife, Theory, Suggested
Contributed by MehDeletingLater
Share - Permalink - Source 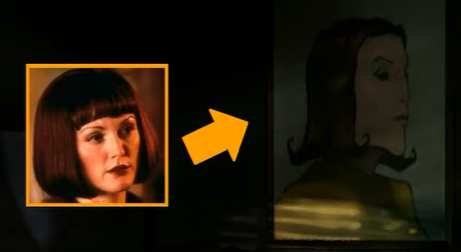