Nintendo Switch, PC, PlayStation 4
61 Trivia
Chapter 2 contains unused data for Susie gaining a plushie of herself in her room should Kris give her Queen's gift during the party's reunion at the Cyber City carnival. Adding the Susie plushie back in and interacting with it results in unique dialogue between Susie and Ralsei commenting on it.

In a tweet posted off the heels of Chapter 2's release, graphic designer Temmie Chang showcased not only the sprite for the Susie plushie, but also sprites for a Ralsei plushie and a Noelle plushie, indicating that Queen's gift was originally planned to morph into the likeness of whoever the player decides to give it to. In normal gameplay, the only selectable character who opens the gift is Berdly, who finds a plushie of himself with nipples.
EasterEgg, Secret, UnusedContent, RemovedFeature, UnusedText
Contributed by game4brains
Share - Permalink - Source 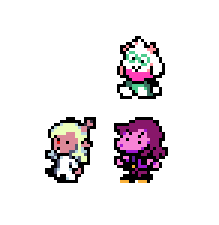