PlayStation
1 Trivia
The game's cover artwork originally featured the American flag and green gaseous fumes, and on the back the words "WANTED: Deadly Force Authorized", "deadly arsenal" and "terrorists". However, due to the then recent 9/11 terrorist attacks and the anthrax scare, the game had been recalled with these removed and the back text changed to make it more politically correct. This pushed back the game from its original September 25th, 2001 release to early November 2001. Some copies with the original box art had already shipped, making that version a collector's item and dubbed the "9/11 American Flag Cover". It also came in a dual case, despite the game only having a single disc.
Development, Censorship, General, RealLife, VersionDifference, ReleaseDifference
Contributed by KnowledgeBase
Share - Permalink - Source 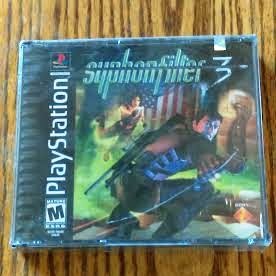