PC, PlayStation 3, Xbox 360
101 Trivia
In March of 2018, a passive effect called "Sketchek’s Bequest" was added to the Pyro's weapon the Axtinguisher which granted the player a speed boost after killing a burning opponent. This was named in honor of the YouTuber known as Sketchek, a prominent Pyro player in the community, who in 2015 claimed in a video to have a "terminal illness" that was getting worse and had later presumably died. However in 2019, Sketchek returned and stated that he lied about dying because he wanted to retire from the game as it had "ruined his life" and he wanted to "go out with a bang." The effect was subsequently removed in an update.
EasterEgg, Reference, UnusedContent, RemovedFeature
Contributed by KnowledgeBase
Share - Permalink - Source 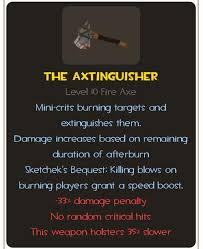