SNES
24 Trivia
In Princess Toadstool's room in Mushroom Castle, looking behind the fireplace results in finding a mysterious item labeled "Toadstool's ???". It is never revealed what the item is, as finding it will result in either Toadstool's grandmother driving you away and giving you something else in exchange (the latter one being only on the first instance), or Toadstool angrily scolding you if you have her in your party. In the Japanese version, the item is labeled "Peach's XXX" (as Toadstool is called "Peach" in the Japanese version), giving less subtle ideas on what the item was originally intended to be.
VersionDifference, RegionalDifference
Contributed by game4brains
Share - Permalink - Source 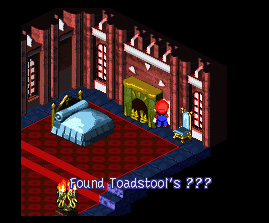